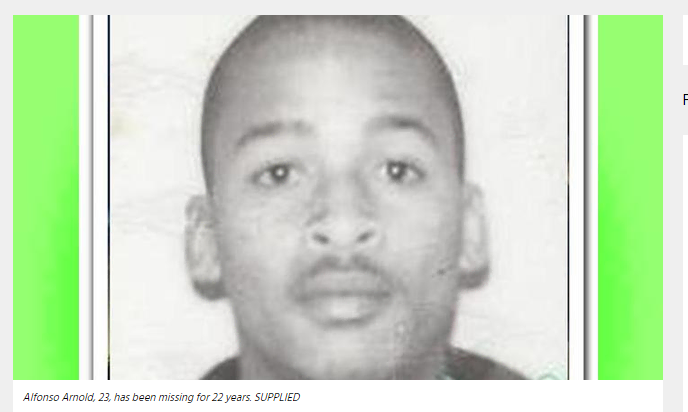 Cape Town – Twenty-two years after her son vanished while on a camping trip with friends, a mother believes the truth lies with those who saw him last on that Easter weekend.

In April 1999, Alfonso Arnold, 23, was in love with his girlfriend and worked for a pharmaceutical company with his step-dad Ernest Petersen.

During the Easter weekend, Arnold and five other friends, three women and two men left their homes in Mitchells Plain for Betty’s Bay where they stayed in chalets.

Now, 22 years later, Arnold’s mother, Doreen Petersen is praying for answers about what happened that weekend. She said her husband, Ernest died from cancer last, without any closure on their son’s whereabouts.

Petersen said her son was a responsible individual, and that she suspects this was a love triangle which resulted in Arnold’s disappearance.

She explained that the group had been stranded at Betty’s Bay, and that when she and her husband went to fetch them, they learnt Arnold that was missing.

The friends had relied on another person to transport them to the camping site, but were left with no way to get back home after the vehicle broke down.

Petersen said the friends claimed that while going on a walking trip to Kleinmond and upon the return to Betty’s Bay, Arnold mysteriously vanished.

To this day, Petersen said she was suspicious of the story.

“They were couples, three girls and three boys,” she explained.

“My son was healthy when he left my home that day. The friends said they had walked to Kleinmond and on the way back from there to Betty’s Bay, he went missing, he took a different route.

’’I believe something happened that weekend. There is a beginning and there is an end. Before my husband closed his eyes last year, he said he had a desire to know where his son is,” she said.

Petersen said police joined the search and sniffer dogs were sent to the site of the disappearance, with Arnold’s clothing used as a scent.

Family and friends also joined in the search.

“For the people of Betty’s Bay, my son’s disappearance was a strange one, because it was a quiet area. My husband opened up the case at the police station and they dispatched sniffer dogs. The dogs were given his clothing and bag to use as a scent.The dogs found nothing.

“I buried my husband, and it is not right that I do not have answers about what happened. They (those on the camping trip) and God knows what happened on that day,” she said.

Michelle Ohlsson, who formerly ran the organisation Concerned Parents of Missing Persons, said they had assisted the Petersen family after their son’s disappearance.

“We were a support group for them, the case was not in our jurisdiction, but we would take the mother on our counselling afternoons and day of prayer.

“Doreen and her husband were very cheerful people, and unfortunately we could not help with the case because it was out of our jurisdiction,” Ohlsson said.

Police spokesperson Colonel Andre Traut said: “Alfonso Arnold was reported as a missing person at the Kleinmond police station in 1999. The circumstances surrounding his disappearance were investigated and he was never found.”